I host a buy-and-sell show (Dial - A - Deal!) at the radio station where I work. In January of 2021, at the height of the pandemic lockdown (one of them...) a guy called up selling a telescope: a Meade Lightbridge 12. Be 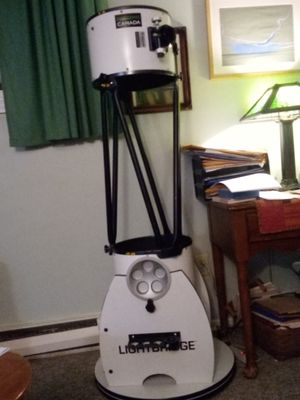 ing the host of the show has its advantages, and I was the first interested buyer to go and see it. I didn't know a ton about telescopes beyond the essential differences between a reflector and a refractor (a very basic one of which I had had for years), and I knew what a Dobsonian mount was, but some quick research told me that for the money he was asking, if it worked at all I as getting a pretty good deal.

The timing was ideal. Covid meant I couldn't do the things I most liked to do: get together with people, play music and play hockey. We weren't supposed to mingle, or gather. I'm a bit restless by nature at the best of times, and there were some listless days.

So a telescope came along at just the right time.

Astronomy has always been a fascination. When I was in Grade 4 - and I'm old enough that that was the final year of the one-room schools where I live - the teacher invited me up to the front to teach a series of lessons on astronomy during science period.

I certainly have other abiding interests. I'm a fairly fanatical oldtimers hockey player, and will be until the various aches, pains, bangs and bruises overtake the fun. I played music full-time and that was the all-consuming organizing principle of my life for over two decades.

The telescope ignited my i 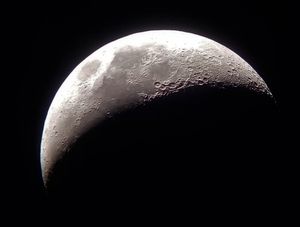 nner nine-year-old fascination with, well, fascination. My first Holy Fuck moment was the first time I slewed around to the Orion Nebula. There have been plenty since.

Beyond a few attempts at shooting the moon with my cell phone - which were not entirely unsuccessful, I have no real interest in astrophotography.

For me, it's about seeing. With my 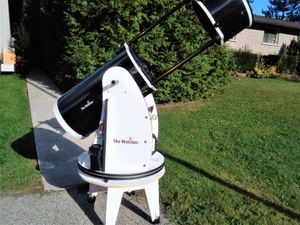 own eyes. I get a deep thrill every single night from the fact that the photons (or light waves, depending which experiment you did last...) striking the retina of my eye have travelled umpteen thousand or million years until the instant I see them.

The Meade has turned out to be the first in a small collection. At present I also have a Celestron SLT 127, and the newest acquisition is a Sky-Watcher Flextube 300 with an upgraded mirror.