Raised near Owen Sound, Ontario on a hundred-acre farm that had been in the family since 1875, Steve grew up steeped in music. Dad sang bass, Mom was a music teacher and choir director, and choral music was a permanent feature of life.

His parents bought him his first toy drum when he was two, and spent most of the next 20 years wishing they hadn't. Although he took piano lessons, sang in church and school choirs and played double bass in the high school orchestra, drums and rock & roll were always first on the list, and the old farmhouse shook.

After moving to Toronto in 1981, Steve apprenticed as a recording engineer in a studio owned by film composer Paul Zaza, an experience that provided a good deal of up-close exposure to the world of recording, arranging and producing music. He also dabbled in civilian life for awhile, writing ad copy for the Sears Canada catalogue for three years. 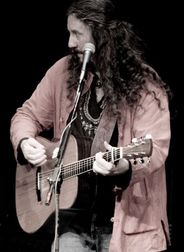 In the summer of 1988 he moved to Peterborough, Ontario and joined Tanglefoot, discovering what he has since referred to as 'a calling'. The next 21 years were spent creating, performing, recording, touring, laughing and exploring with some of the most talented, inspiring and generally excellent people anywhere.

Among his musical influences he lists Joe Grant, Led Zeppelin, Stan Rogers, Benjamin Britten and John Rutter. His tastes generally tend toward the dramatic, something he attributes to having a restless nature. He says he's easily bored, but claims his idea of a great day is sitting around in an English cathedral doing pretty much nothing.

In civilian life, Steve can most often be located on the premises of Bayshore Broadcasting in Owen Sound, where he lurks in the nether regions of the building working as freelance producer and announcer. Since 2012 has he begun performing again with RPR, a band comprised of former Tanglefoot colleagues Rob Ritchie and Al Parrish, and percussionist and singer-songwriter Beaker Granger.